Insomuch that the black widow spider is unique in all creation in both her dominant appearance over the male and her practice of killing and eating her mate (whereby she receives her name), she is a clear testimony of the women’s rights movement.

Yahweh God’s creation is not just a haphazard addition of animals to the earth so as to simply occupy it; but rather, all things created by Him are governmental and reflect His order and His purposes.  For example, He set forth clean and unclean animals that reflect His governmental laws and ways.  Likewise, there were specific animal sacrifices that could be presented to Him because of their governmental representation; and specific animals were used in establishing covenants.  Yahweh creates nothing without order and purpose and government, and the black widow spider clearly speaks!

Not only does she speak via her unique dominant appearance and practice of devouring her mate, but the distinct and unique marking on her abdomen speaks as well—that which is called a red hourglass.  But this is far more than just an hourglass; it is a clear and revealing testimony as to what her actions and appearance represent and accomplish.

Her red marking is actually two distinct triangles.  In fact, on some black widow spiders the two triangles are unconnected and distinctly separate from each other.

What is the Creator representing in this unique and vivid testimony?  It is a governmental representation that is in clear contrast with the message of King Solomon’s Seal.

Common to Judaism, Christianity, and Islam, legend holds that King Solomon had a wondrous signet ring that was the star-like figure formed by the union of two triangles.

Therefore, what we see evidenced on the black widow spider, as well as in the women’s rights movement that she vividly represents, is the woman ▽ ruling over the man △ .

Attested to by the black widow and her distinct red symbol, this Cursed movement has separated this nation from Yahweh God’s government, and separated men from women, destroying the family.  It has put women in places of authority that belong solely to the man, and the man ends up being ruled over and devoured by the woman.

Consistent with everything about this entirely destructive movement, that which it sets out to accomplish in making the male and the female one by erasing the line of distinction between them (homosexuality), in fact brings just the opposite—dividing the two, evidenced by dramatically escalating divorce rates.  The women’s rights movement is a vicious counterfeit to God’s government, usurping His ways and destroying true oneness that comes by the uniting of man and woman under the man’s headship.

In clear contrast, Yahweh’s divine order, possessing great value, is the reverse—the man △ rules over the woman ▽.  This divine order is evidenced by the greatly prized and valued diamond.

Fittingly, the diamond is the ultimate gemstone, possessing many strengths and highly desirable qualities.  The diamond is the hardest natural material, four times harder than the next-hardest.  Its superlative physical qualities of pureness, durability, dispersion of light, and beauty, make it the most desired and costly of all gems.  This remarkable stone, with all of its excelling and valued qualities, is given to us by Yahweh to represent His government—the man ruling over the woman, and God ruling over man.  In truth, this is the covenant the woman is obligated to when the diamond ring is placed upon her hand at marriage—two becoming one flesh under her husband’s headship.

Thus, the diamond is Yahweh’s remarkable contrast to the black widow spider—a stark contrast that should cause us to absolutely reject the women’s rights movement and all it espouses, and wholly embrace the exceedingly greater value and sound government of patriarchy.

As a reminder of this truth, you will see the diamond used throughout this book, including a pronounced placement on the back cover.  Also, it is a part of the RTC Quest Publications logo.

In contrast, it would be very accurate and wholly appropriate for the women’s rights movement to use the black widow spider as their logo, for this is precisely what Yahweh has given us to represent them—the feminine work that dominates and devours the man, separating the union of God and man, and man and woman!  For this reason the black widow spider with her red marking was selected for the front cover of this book—she is Yahweh God’s testimony to this wholly destructive movement!  She is the mascot of the Curse of 1920!

And actually, the women’s rights movement already uses this symbol, not only with the exclusion of the male symbol altogether, but also by conforming and claiming the male symbol as their own.

First, the National Organization for Women (NOW) uses a logo to repre-sent their push for lesbian marriages that mirrors the following pattern:

It is quite significant that they adopted only the female symbol ▽ of the red hourglass on the black widow spider; for the lesbian marriage wholly excludes the male, devouring and eliminating him altogether. 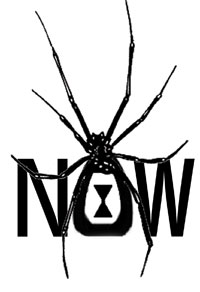 Additionally, it is quite significant that the “O” in the NOW logo is moreso the masculine triangle with a flat bottom to the letter and pointed top, as indicated here.  (Both logos can be viewed at their website.)  Clearly, NOW’s true goal is evident—to become the man, to replace him, even to eliminate him!  The highest goal of feminism is to divorce man—entirely!

Therefore, it would be most appropriate for NOW to put their true intentions out in the open and place the hourglass of the black widow spider in their logo as represented here, for this is precisely what they fulfill!

Or more appropriately, they should use this more descript and graphic addition to their logo.

In conclusion, we have seen in Chapters 2 and 5 that the woman was tempted in the Garden by the serpent; and in like manner, women in America were tempted by the black man’s plight.  Therefore, it is not without like attesting purpose that, of all the different colors of spiders, Yahweh made the black widow distinctly black.  Not only does she attest to the division of man and woman, and of God and man; but she attests to the Curse of women’s rights that is rooted in black Africa.  NOW we know the truth!